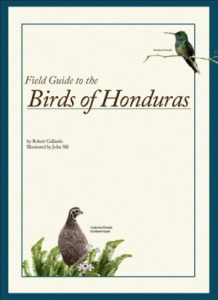 Robert Gallardo was a Peace Corps Volunteer in Honduras in the early 1990s and has lived there ever since. I first met Robert in 2005 when I was attending a meeting in Honduras and he was guiding a group of birders staying in the same hotel. On several later trips to Honduras we hired Robert as our bird guide after our meetings were over. In 2012, Robert asked me to help with a book on the birds of Honduras that he was going to write using the 25 years of data he had collected across the country. Robert came to Missouri as part of a speaking and fundraising effort to cover the $135,000 he thought he would need to cover the cost of the beautiful art plates, publication and printing of the book. He asked me to help him edit the book along with two other folks from Honduras. I spent my weekends and evenings during 2013–2014 editing the first third of the book.

The Conservation Department had agreed to match the funds raised by Robert that were placed in the Missouri Tropical Bird Account in the Missouri Conservation Heritage Foundation (MCHF). Robert was able to raise all the funds he needed with these MCHF funds, along with support from Europe and within Honduras. He completed the book from start to finish in three years, which is what he estimated when we started on this adventure.

On Jan. 17, 2015, there was a ceremony to celebrate the completion of Robert Gallardo’s book, Guide to the Birds of Honduras, in Peña Blanca, Cortes, Honduras along the north shore of Lake Yojoa where Robert now lives. About 225 people were in attendance. Amazingly, the Honduran Government’s Minister of Tourism and the president of a national organization of the tourist industry businesses were present and had arranged to cover the cost of the ceremony. This is the first time I have ever heard of government officials attending a ceremony for bird conservation; an amazing feat in itself. And they agreed to translate and publish the book in a Spanish edition at government expense.

Friends, neighbors and several other people including the Minister, President of the Chamber of Commerce, several local community project leaders, as well as myself and Olivia Diaz Diaz, Robert’s fiancée throughout the book process, gave presentations. The whole project never would have happened without her encouragement.

Robert almost quit, but I like to think that Chris Spooner of the United Kingdom, Robert Lambeck of Australia, and I had so much confidence in Robert that he continued to plug on. At the book release ceremony, Robert gave a strong and emotional speech that challenged the government and others to participate in bird conservation and eco-tourism development. This book is a major first step that has only been achieved in Central America by Mexico, Panama, and Costa Rica. Nicaragua is well on their way to finishing a bird guide, but hasn’t achieved the final stages of publication yet. This book will be a valuable tool for use by many potential tourists who travel to Honduras and hire local guides to take them to remote places to find birds and other wildlife.

Bird guides and park staff also will be able to know more about the birds and what habitats they depend on. It will also be valuable to the conservationists and scientists that work in the country and will help states that participate in international bird conservation to know where shared migrant birds are during migration and winter in Honduras. The logos of the Conservation Department and MCHF are on the title page of the 550-page book. Thanks are also given to several MCHF individuals who worked to handle the funds that supported the project, and the State of Missouri is included in the dedication of the book.

The Conservation Department has a limited-edition copy of the book, one of the 350 printed just for the ceremony, and we will receive 40 copies of the regular edition as part of our agreements supporting the writing, art and publication of the book. There will be another 5,000 copies printed and available for purchase in April or May 2015. This book alone, and Robert being asked to join the Honduran National Bird Tourism Strategy Team, will change the bird tourism industry for Honduras and benefit the lives of many of the guides that Robert has trained over the years, about 45 at last count. Hotels, eco-lodges and entry fees to parks and wild areas will help protect more habitat. The current U.S. Ambassador to Honduras is a birder and has met with Robert. And most of all, this is the first time that I know of any minister of the Honduran government who has gotten involved directly in a non-governmental effort of this nature.