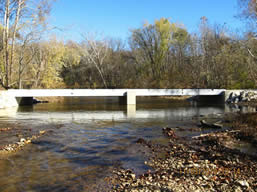 Low water crossings on small Ozark streams can block the movement of fish and other stream animals. They also can block vehicles from passing when the streams are high. Missouri Conservation Heritage Foundation (MCHF), using its Stream Stewardship Trust Funds, has helped to fund a number of low water crossing replacements. The new, free span structures improve fish passage and restore habitat. MDC’s Doug Novinger and Jamey Decoske are studying changes in Niangua darter populations in response to these projects.

As of 2011, they have sampled streams above and below 14 low water road crossing improvements to evaluate changes in fish populations and habitat associated with the bridge projects. This study has shown that most of the crossing replacements were associated with increases in Niangua darters as they moved into newly available habitat upstream from the crossings. Increases in species diversity showed that other darters also benefitted from the improved passage. Niangua darters declined below some of the structures, but were still present at the same sites where they were previously sampled.

The researchers predict that the declines downstream will be temporary and relate to short-term habitat impacts from the mobilization of fine sediments that had accumulated upstream.