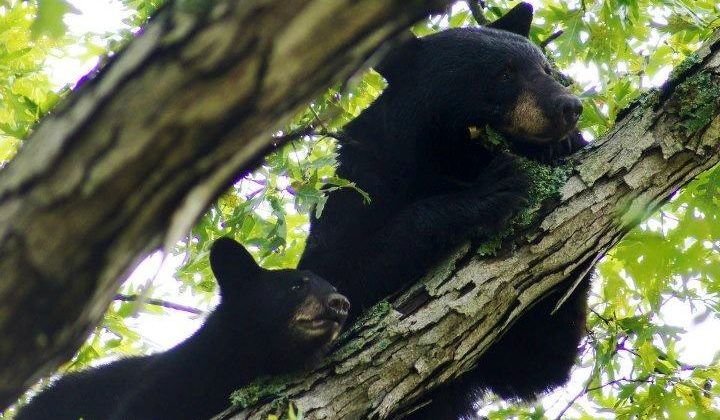 Your generous donation to the Missouri Conservation Heritage Foundation will support research and education designed to better understand and manage Missouri’s black bears.

Do we have black bears in Missouri? The answer is yes, we have a small but possibly growing population. Black bears appear to be making a comeback in Missouri after being nearly eliminated from the landscape in the last century. In fact, new research using DNA analysis suggests that descendants of Missouri’s original black bear population may have survived in a part of the Ozarks for more than a century. Re-introduction efforts in Arkansas during the 1960s have also led to the re-appearance of black bears in our state. Today, black bears are being sighted with increasing frequency. Females with cubs are not uncommon, and immature males continue to disperse, expanding their range.

The black bear is the only bear species found in Missouri. It is one of the largest, heaviest and most intelligent wild mammals in Missouri. It has a long muzzle with a straight facial profile, rounded, erect ears, rather short, stout legs and a very short tail practically concealed in the long, heavy fur. Missouri bears range from, glossy black to brown to cinnamon. Their muzzle is brown and some have a white patch on the chest. The sexes look much alike, although females are usually smaller than males.

Black bears live in heavily wooded areas. In winter they den in a hollow tree, cave, an excavated hollow in the ground or just a brush pile. In summer they sleep in day beds on the ground or occasionally in trees. Black bearsused to be abundant in the state, but had become rare by 1850 and were nearly eliminated by 1931. Reintroduction efforts in Arkansas have contributed to increasing numbers in our state.

Black bears eat a variety of foods. Plant matter includes grass, berries and other fruits, various seeds and nuts and the inner bark of trees and roots. Primary animal foods include ants, yellow jacket bees, beetles, walking sticks and grasshoppers. Bears may feed on fawns and act as scavengers; they eat carrion and help keep the woods clean.

As black bears become more common, it becomes increasingly important that we enhance our understanding of Missouri bears to ensure that sound management practices are implemented. Ongoing research conducted by biologists from the Missouri Department of Conservation and the University of Missouri is documenting the status of black bears in Missouri and enhancing our understanding of their biology. Researchers are using a wide array of non-invasive survey techniques to gather crucial data on Missouri black bears. At the same time, efforts are underway to educate Missouri citizens about bears and how to avoid potential conflicts.

You can help support these efforts by donating today! Your generous donation to the Missouri Conservation Heritage Foundation will support research and education designed to better understand and manage Missouri’s black bears. Follow this link to “Donate Now” or send a check made payable to MCHF at PO Box 366, Jefferson City, MO 65102-0366. Please direct your donation to “Black Bear Conservation”.

All photos compliments of Missouri Department of Conservation.