Motus Wildlife Tracking System technology is a powerful new research tool used to detect migratory birds that migrate through, breed in, or overwinter in Missouri. Motus tracking projects help pinpoint areas and pathways that Missouri’s migratory birds use during migration, and help researchers target high-use areas where conservation dollars and management can be of greatest benefit. 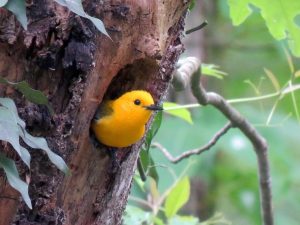 imals over broad spatial scales. Lightweight, digitally coded Motus nano-tags that weight between 0.2-2.6 grams are placed on birds that are then detected by the receivers if the bird passes within a 15-kilometer radius of the receiver. Currently, there are 807 Motus receivers in the world tracking the migratory routes of many birds.

Missouri plays an important part in the migratory pathway for birds coming from Central and South America, with high quality habitat in the Ozark Highlands being used by many birds as stopover sites, as well as breeding grounds. Unfortunately, Missouri is still largely a “black-hole” for the collaborative research needed to gain more information on migratory patterns.

To gain more knowledge regarding migratory routes taken in Missouri, a series of latitudinal “digital fences” are needed. These lines, one in southern Missouri and one in northern Missouri, will capture electronic signatures from Motus-tagged species as they traverse the state. Only 20 Motus receivers exist in the entire Mississippi Flyway.

The Missouri Conservation Heritage Foundation (MCHF), along with the partnership of generous donors, have donated more than $10,000 to help Sarah Kendrick, state ornithologist with the Missouri Department of Conservation (MDC), build a line of Motus receivers in southern Missouri, with the goal of focusing on the northern line soon.

In October 2018, a Motus receiver was attached to a tower at MDC’s Headquarters in Jefferson City. While not in the proposed strategic, latitudinal “digital fence” of Motus receivers across the state, this receiver is close to Kendrick and her staff so they can learn the technology before installing the receivers along the southern line. They recently saw two detections on it! Two Swainson’s Thrushes were detected on May 7 and 22. They were tagged at Grand Chenier Recreation Area in the Rockefeller Wildlife Refuge on the Louisiana coast during migration (late April and early May, respectively). They were likely tagged in the Refuge after hopping the Gulf of Mexico and making landfall. One thrush flew from Louisiana to Jefferson City in 10 days, then to Quebec over the next month. The second thrush flew the same distance from Louisiana to Jefferson City in 18 days, then, surprisingly, flew the same route and was detected on the same receiver in Quebec as the earlier thrush.

The Motus Wildlife Tracking System has been successfully used by researchers to answer questions such as identifying important stopover sites, departure and arrival times, migratory routes, and post-fledging dispersals. In the very near future, Missouri will help answer these important questions, too. If you’d like to donate to help support this project, please go to https://mochf.org/project/1904/.

Read more from the Missouri Department of Conservation